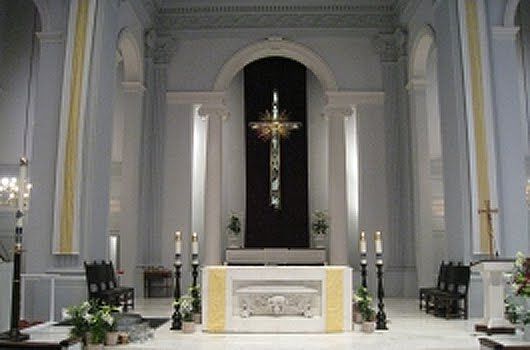 Holy Trinity Catholic Church In Georgetown
On weekends, Biden has kept to his routine of attending public mass, in Washington at the Holy Trinity Catholic Church in Georgetown and at his home parish in Delaware -- occasions that aides say allow him to blend back into normal life, at least for an hour. After one outing, he stopped by a bagel shop; officials expect he and the first lady will be more frequent patrons of Washington's restaurants once the pandemic is over. Source
I'm assuming the President attended the Holy Sacrifice of the Mass this Sunday?
No mention of his Sunday Mass attendance by the Media....
I'm assuming the President received communion at the Holy Sacrifice of the Mass this Sunday?
I'm assuming the President is still publicly pro-abortion (the murder of children in the womb)
I'm assuming the President doesn't go to confession for his mortal sin of supporting of abortion (murdering of children in the womb)
So I'm assuming that the President is till in an unrepentant state of Mortal Sin....
And I'm assuming the President didn't drop dead after his sacrilegious communion because that would have made headlines....
“They who make a sacrilegious Communion, receive satan and Jesus Christ into their hearts—Satan, that they may let him rule, and Jesus Christ, that they may offer Him in sacrifice as a Victim to Satan.” St. Cyril
“As of all the sacred mysteries … none can compare with the … Eucharist, so likewise for no crime is there heavier punishment to be feared from God than for the unholy or irreligious use by the faithful of that which … contains the very Author and Source of holiness.” (De Euch., v.i) The Catechism of the Council of Trent
“For this reason we must remind those intending to receive Holy Communion of the commandment found in St. Paul’s Epistle to the Corinthians (1 Cor. 11:28): ‘But let a man prove himself and so let him eat of that Bread, and drink of the Chalice.’ The traditional and immemorial custom of the Church has always been unmistakably clear on this question: let a person wishing to receive Holy Communion truly examine his conscience and if he be in the state of mortal sin, let him not receive Holy Communion (no matter how contrite he may consider himself to be) without first availing himself of sacramental confession.” Council of Trent