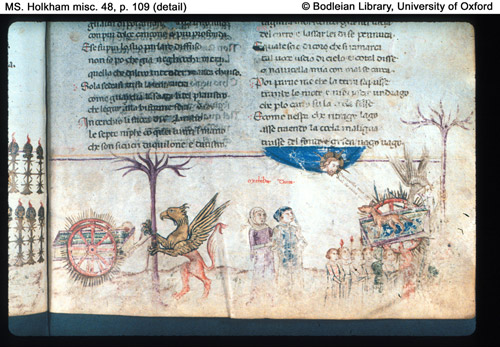 As I beheld the bird of Jove descend
Down through the tree, rending away the bark,
As well as blossoms and the foliage new,
And he with all his might the chariot smote,
Whereat it reeled, like vessel in a tempest
Tossed by the waves, now starboard and now larboard
pur.xxxii.

Most commentators of the Divine Comedy such as professor Joan Ferrante claim that the Uccel di Giove or Jove’s bird (Pur.canto xxxii) is the Holy Roman Emperor.

The better interpretation is that the uccel di Giove is the Holy Roman Pontiff.

This interpretation fits better with the whole theme of the poem, especially when looking at the Tree as representing the Holy Sacrifice of the Mass.

The temporal authority of the Emperor is not allowed to make any changes to the rubrics or prayers of the Holy Sacrifice of the Mass.

Regardless of the outcome (either for good or ill) when the Pope makes a change to the Mass, it only belong to the office of the Pope to do such a thing.

So here is the better interpretation of canto xxxii:

Stripping the Mass of the prayers and ceremonies done by the Holy Roman Pontiff (bird of Jove):

The above is Dante’s prophetic vision of Pope Paul VI (Jove’s bird) stripping the Holy Sacrifice of the Mass (Tree) of most of it’s prayers and ceremonies. The Mass we have today is a barren tree.

This is why the Mass is compared to a tree, because when the prayers and ceremonies are stripped away from the Mass it is difficult for the faithful to bear spiritual fruit. Most of you who have attended the New Mass know this by experience. Who can say otherwise?